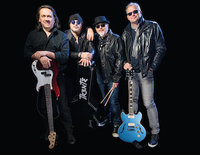 A great story of friendship, that is what best characterizes this Parisian quartet. Created in 1999, after having played Live in famous Parisian venues as Guests for Great White, Mike Tramp, Koritni, Eric Mc Fadden, etc... the Band is back with this new album “Aveugle & Sourd” ("Blind & Deaf") composed of 11 songs full of Power Pop well muscular and neat arrangements. Stef Reb (who also sings in Ocean) transports us to his universe where everyday stories and more poetic texts come together ... TR3NTE offers a Bonus duet with Danny Vaughn (singer of Tyketto), who rubs for the first time in his career in the language of Molière ...