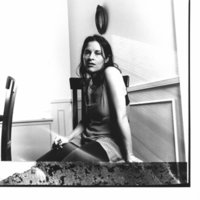 Jennifer Terran is an outstanding vocalist, pianist, songwriter, producer, hip-hop dance instructor, entrepreneur, mother (and too many other things to mention). With her independent record label, Grizelda Records, she has put out five phenomenal solo records since 1997: "CRUEL", "RABBIT" the world wide critically acclaimed, "THE MUSICIAN", "LIVE FROM PAINTED CAVE" and her latest, "FULL MOON IN 3".

Terran has been blowing away critics and listeners alike for years with music that makes you really think and feel. It's just beautiful, intense, pure, real, inspiring stuff that's a little difficult to explain away by the usual descriptors.

Many people upon hearing Jennifer's music and her unbelievably beautiful voice are reduced to tears, though Jen has a definite sense of humor that can make you laugh you're ass off.

Anyway, you're going to love this woman's music! Her CDs, especially THE MUSICIAN are simply in a category of their own. And all we can say is that if you're reading this, be glad! Jennifer's a rare, rare talent. You won't be finding her music to be out of date or sounding stupid in ten years, because the musicianship and songwriting are outstanding and because she puts to light aspects of life that are essential to who we are. She's a master of beauty and intensity and has the amazing ability of moving people in a truly soulful way.

At 4 feet and 70 pounds, the little girl with the chocolate hair and melancholy eyes was setting off a devastating emotional wave in the audience of her grammar school auditorium. Her name was Jennifer Terran- the tiny child wonder who had a talent for making people cry when she'd sing. Not a soul who witnessed her musical utterings could deny it. She had a definite gift for music and an astonishing voice well beyond her age? a voice that genuinely and compassionately reflected what seemed like the very depths of human suffering and joy.

The rawness and charge that is Jennifer Terran's music, has its roots in the lives of those who brought her into this world and in a childhood that was nothing short of turbu lent. Terran's pare nts were very creative and expressive people. Her father, trumpeter Tony Terran, was an integral part of the LA studio music scene playing in over 10,000 television, motion picture and rock and roll recordings throughout his career with everyone from the Beatles to Ella Fitzgerald to Frank Zappa. Jennifer's mother, Adel, was a dancer, painter, singer, builder, entrepreneur, mother of five and a woman of remarkable energy and intensity.

Raised in Los Angeles, Terran was engulfed early on by a whirlwind of siblings, piano lessons, worn out records, smog, traffic, screaming, divorce, drama and the death of her mother at 13. The heat and the snow of her life experiences would contribute greatly to the beauty and intensity so characteristic in Terran's music.

Though Terran had been singing and performing most of her life, she did not begin writing until she reached young adulthood. The remarkable thing, was how whole and developed her compositions were from the start. In tact, was that signature Jennifer Terran style- beautiful, distinctive melodies with a brilliant knack for injecting subtle dissonance into the songs. While her unique approach to songwriting could be shocking to some, to those in the know, it was down right inventive. She used the art of composition to express emotional statements genuinely and truthfully and this is why her music is so effective an utterly moving!

When Jennifer began performing her original compositions live, it was obvious to her audiences that she was no ordinary pop singer/songwriter. Terran was proving to be a true artist following her own rules- refining her own brand of music. With the right elements in place, Terran began recording and performing more extensively both as a solo act and with her bands, Puppet Show and later Grizelda. It was in Grizelda she would meet bassist Bren dan Statom- a brilliant musician and arranger who would work with Jennifer for years to come.

Adamant about keeping the music soulful and integritous, Terran only accepted career opportunities that would keep her art pure. As a result of this ethic, she became more and more independent- starting her own Grizleda Records label and becoming well versed in the craft of music making, recording and promotion.

Terran was considered by some to be an oddity, in that she had such blatant talent, focus and commitment to music, but not the commercial success to match it. However, people began to get a taste of what Terran's impact might look with the release of her independent solo debut Cruel in 1997. Terran was attracting the support of people like engineer/ producer Julie Last (Joni Mitchell, Ricki Lee Jones, John Lennon etc?), poet Joe Frank and Dreamworks' Chris Dour idas (performing live on KCRW's Morning Becomes Eclectic) (Click here to hear Jen's KCRW performance). Cruel's release drew rave reviews from listeners, labels and critics alike.

Soon after the completion of Cruel, Terran went into the studio once again to record and produce her second CD, Rabbit, which further established her importance as a creative artist in the music scene. With it's release a mere year after Cruel's, Terran was also beginning a new venture organizing and headlining the Female Artists Tour, F.A.T. Her purpose with the festival was to support independent musicians and fill a void in the listening world for original, untainted and uncommercialized music. The success of F.A.T. confirmed that there was a definite need for this as it continued to gain support from audiences all over.

After much effort and hard work with F.A.T., Terran decided to take a hiatus from public performing to work on a vision that she had been conceptualizing for years- the making of The Musician (her 3rd independently released CD). With utter determination, Terran learned more intimately than ever, the art of recording engineering, producing, mixing and even mastering. In two years, she put together her custom home studio and reco rded what became by far her most remarkable recording to date.

Like with C ruel and Rabbit, Terran was once again pushing the potential of what recording and performing was all about- but in a way that was far more sophisticated and realized than ever before. The Musician triumphantly established this true recording artist.

Since the release of THE MUSICIAN, the record has received tremendous praise from around the globe from press and fans alike. She has toured Europe multiple times and has since released her first live album... "LIVE FROM PAINTED CAVE" in 2004. To come in 2005-2006, will be the release of a record that's been in the works for 3 years... "FULL MOON IN 3".