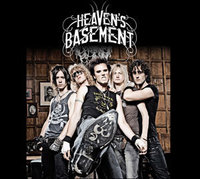 Heaven's Basement is a hard rock band from the UK formed in 2007 and renowned for heavy touring schedules and extremely energetic live performances. The band released their own self-titled E.P in 2008. which was recorded at Sandhills studio in Liverpool. The rest of the summer was spent with the band playing small clubs and pubs all across the UK to build their fanbase. In November 2008 Heaven's Basement were invited as main support to Thunder  on their UK tour which helped rapidly build their fanbase. After impressing Thunder on their UK tour, Heaven's Basement started 2009 with the main support slot to Thunder on their European tour in Feb/March which included dates in Belgium, Holland, Germany and Switzerland.