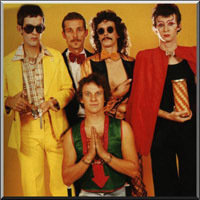 In the mid Seventies Skyhooks basically gave the Australian Music Industry the enema it had been needing. Skyhooks were cheeky,brash,colourful,wore makeup (many years before Kiss were conceived),songwriter Greg Macainsh with a grab bag of amazing tunes-many sprinkled with Melbourne place names and Australian themes,put together the band that would change the musical history of our country. It lit the fuse that put Australian bands back on the front covers of newspapers and Australian music on the shelves of record shops.

Their debut album "Living in the Seventies" went on to sell 300,000 albums. They appeared on Australian tv on the first day of colour transmission,shocked the parents and became pin up heroes for a generation. If it were any other bands the theatrics would overshadow the music. Skyhooks were not just another band.

Their second album "EGO is not a dirty word" debuted at number one,while their single of the same name was sitting opposite at #1 on the singles charts. The LP went on to sell over 200,00 copies and their "EGO" tour sold out completely.The band needed new challenges and did what few other Aussie groups had done..they headed to America. The Mercury/Phonogram label signed them and many months of 1976 were spent Stateside trying to crack the American market that just could not relate. Whilst in America they hit the studios and recorded their third album Straight in a gay gay World. The album went multi platinum in Australia and one single, the country sounding "Blue Jeans" was a huge hit across the Tasman in New Zealand. The band returned home for their Brats are Back Tour. "The Brats are back" tour showed a tougher Skyhooks. A young hot shot guitarist called Bob Spencer (futur The Angels) joined the ranks and the band hit the studios in Sydney and Melbourne. The first single featuring the new lineup- "Party to end all Partys" made the top 20,but it was the next single- the hard rocking "Women in Uniform" that was the hit. Top 10 and it wasn't only Australian ears that heard it's worth. Heavy Metal giants Iron Maiden gave it the thumbs up and decided to record a version themselves. Meanwhile back in OZ...the 4th album "Guilty Until Proven Insane" made the top 10 and sold well. United Artists released it in Europe.The 'Hooks took this tougher sounding Skyhooks back to their roots, the Australian Pub circuit,while other seventies bands were playing to half full halls, the Hooks took the low road and packed out venues