Categories ARTISTS B BLACKIE AND THE RODEO KINGS

BLACKIE AND THE RODEO KINGS 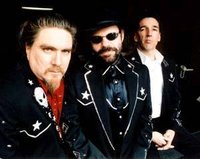 Blackie & the Rodeo Kings - the band - is a labour of love for Colin Linden, Stephen Fearing and Tom Wilson.

In 1996 their debut album was released to critical acclaim.The first album, High or Hurtin', brought 14+ Willie originals to an appreciative audience. The musicianship is superb, the vocals right on, and the lyrics are sublime.

All three continued their successful solo careers garnering numerous individual awards and nominations. The chemistry, which first brought the trio together, drew them back in 1999 for Kings of Love, a double album of originals and covers, folk,rock, ballads, even surf instrumental: an amazing achievement from Colin, Tom and Stephen which won the JUNO in the Best Roots & Traditonal Album, Group category.

This newest effort finds the trio maturing musically, featuring some of the best material that these three talented songwriters have ever put to disc.

Recorded in the winter of 2003, B&RK captures the raw energy of the band, offering the listener a deep well of great songs and sounds that they can go back to again and again. From the rambling Honky Tonk twang of "Swinging From the Chains of Love", to the world weariness of the gritty first single "Stoned", to the unabashed and infectious rock n' roll of "Had Enough of You Today".

BARK features 12 original songs, as well as covers of Willie P. Bennett's "Willie’s Diamond Joe" and Bruce Cockburn's "Tie Me at the Crossroads". The album highlights the band's expert ability to meld and switch between musical styles and influences, like the bluesy swagger of "Water or Gasoline", to the bittersweet "If I Catch You Crying", a heartfelt affirmation of friendship and healing during life's heartaches.