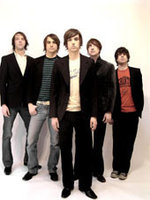 In the basement of a nondescript Megacity lowrise, down a narrow, low-ceilinged hallway, to a dingy, tomb-like rehearsal space, walls bedecked with countless band posters elbowing each other for space, a lengthy strand of tiny Christmas lights snaking around the water-stained ceiling, and the floor a checkerboard of frayed squares of leftover/discarded carpet. Amidst the three drum kits, baker’s dozen amps, and an army of mic stands and cables, Whitehorse, Yukon’s Stephen Kozmeniuk stands and surveys the band he has handpicked for his sophomore album, Every Page You Turn. Manning the drums is Nanaimo’s Maurie Kaufmann: “Maurie’s the quiet one,” Kozmeniuk says. “I found him withering away in Nanaimo, cold and hungry for something more. He’s adorable. Hell of a drummer, though, that’s for sure.” Handling bass duties is ’Peg City’s notorious heartbreaker/producer Steve Payne: “Steve and I have seen a lot over the last year. Cavemen, free beer, girls, the ocean, propellers going out on planes we were on.” On one guitar, Rolla Olak, another Vancouver Island native: “I met Rolla while he was still playing with Grace Nocturnal, an incredible band. When they split up I gave him a shout and we hooked up and jammed in Victoria. After a night of drinking Polish vodka and beer with his father, we decided that the fun couldn't end there.” On the other guitar, the mythic James Robertson (ex-Carnations) of Toronto: about him, Kozmeniuk says only, “That bastard soaked me in beer the other night.”

Penned and played almost entirely by Kozmeniuk, the self-titled Boy debut (Bumstead Records 2003) was an I-can’t-believe-that’s-Pro Tools bedroom opus. With its sweet, seemingly effortless melodies and undeniable pop aplomb, the album was quickly championed by media and fellow musicians alike. Now backed by MapleMusic Recordings, the new album finds Kozmeniuk in cock-sure, collar-up rock ’n’ roll mode. The result is the rollicking, bombastic, impeccable Every Page You Turn, laid to tape on Vancouver Island with the help of Brenndan McGuire and mixed by the Canadian Albini (only nicer, and who wears cardigans), Joao Carvalho. “He’s very kingly; like a lion,” Kozmeniuk says of working with Carvalho. “Though it’s not golden by any means, he does have a bit of a mane, and he just goes about everything in such a regal way. He actually made us call him King, too. Like, we couldn’t just go, ‘Need a refill on that coffee, Joao?’ It had to be, ‘You doing all right for coffee there, King?’” Added Kozmeniuk, “He mixes everything from a jewel-encrusted throne.”

Back in the basement, the rehearsal begins. Kozmeniuk, Olak and Robertson layer guitar lines for the incendiary first single “ Same Old Song” and by the time Kaufman comes in with the relentlessly driving beat, the air feels asterix-laden. Next comes the hard-edged, anthemic “People Come On,” followed by the awash-in-guitars title track. Then it’s the boozy jukebox r&b of “Black Cat,” the big sky feel and tasteful twang of the poignant “A Line to Stand Behind,” the Pink Floyd “Breathe” vibe of lone instrumental “The New #2,” and finally the scruffy, sneering “Up in This Town,” with its indelible “guitorgan” hook. Each track rears and swipes and claws at the rehearsal space walls. The door’s hinges strain and bulge as the little room fights to contain these towering conflagrations in waiting– songs that know only to spread and consume. In “The Shells” Kozmeniuk sings of “taking back the stars from the night.” Taken out of this dungeon and given room to breathe, these songs could at least shake a few loose.

All writerly flourish and synergistic hyperbole aside, go get this album. Love the shit out of every glorious second of it, let the melodies bake themselves to the base of your brain like bottom-of-the-pot rice, let all those big beautiful chords swirl around and rough you up a bit, then be sure to check out the live spectacle, where you will be left arms akimbo, mouth agog, and with a little dirt in your smile lines.