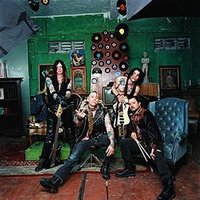 „When rock’n’roll isn‚t watered down it transcends into fashion and life. Rock is America‚s greatest art form it is meant to be enjoyed, loved, and loathed. - Scotty P

Rock n Roll needs another kick in the ass. Simmering just beneath the surface of the underground, there is a band of Nuevo-sleaze-rock-avatars that are dying to shove their black leather biker boots all the way up the lower orifices of the amalgamation known, of late, as rock. They are rock stars on the rise and they are everything that rock and roll was ever intended to be! They are flamboyant they live life out loud∑ they reek of raunch and they are scene-stealers. They were named one of „The Top Bands to Watch in 2005 by world-renowned Metal Edge Magazine and touted as « the next Motley Crue » and « the band that Guns N Roses could’ve been ». They are Asheville, North Carolina‚s CRANK COUNTY DAREDEVILS and these bad boys will make you want to pick up a knife and join their fight to bring back the flash, the decadence, the smoke and mirrors, and most importantly, that blessed feeling of sonic revival that comes only from the pangs of a full on throw down with rock n roll.

Kings of Sleaze, CRANK COUNTY DAREDEVILS debut CD is a killer showcase for their raw hybrid blend of metal guitars, punk infused rhythms, and growling vocals that spin primal tales of crazy chicks, walking the rock walk, and the glorified journey of every new day on the road to fame. Released March 18, 2004, during an anti-showcase at the SXSW Music Fest in Austin, Texas, the CD was recorded in two days at 2 High Studios in Atlanta, Georgia. Produced by CRANK COUNTY DAREDEVILS and Barrett Nichols, the 9-song Kings of Sleaze has been critically acclaimed already. Metal Dave Glessner of Metal Edge Magazine not only gave the CD album of the year, he also claims this CD is « a must-have soundtrack for sin-sational, cock-rock-style, Saturday night debauchery », and Sleazegrinder maniac Ken McIntyre summed it up when he said, « rock n roll is about sex, electricity, and firepower. CRANK COUNTY DAREDEVILS have so much of all three on deck here that they‚ve just GOTTA give some of that s#*t away, man! ». And the female critics? Suffice it to say that these rock n roll soldiers inspire women that analyze rock to say things like, « the music makes a girl wanna drink whiskey straight from the bottle and lick the swear off rock star » and « the Daredevils make me wanna dance naked in a cage over the stage »

And it’s no wonder what with those bullet belts, bandanas, mirrored shades, dangling cigs and ‘’those tattoos’ if ever there were looks that kill! The band has been together for 3 years now and are wowing audiences everywhere as these « kings »command the live stage like thoroughbred rock royalty. Influenced by artists like Zodiac Mindwarp, Motley Crue, Sex Pistols and Guns N Roses, one can almost feel the magic brewing around them as they unleash the sleaze circus they feel their audience deserves. CRANK COUNTY DAREDEVILS are firm believers that if a person pays to see a rock show, that is exactly what they should get. Drummer Mark Hammer and bassist Billy Velvet fuel the aggression with their thunderous rhythms and rock star antics. Adam Stevens tantalizes the crowd with gritty guitar riffage and charismatic vocalist Scotty P entices would ve followers to free fall into the power of rock n roll.

With three 2004 East Coast/Midwest tours under their bullet belts, in March the band will use Daytona Bike Week in Florida and their official SXSW Œ05 showcase in Texas as starting points for their first West Coast tour to support « Kings Of Sleaze ». The road junkies will be spreading their sleaze disease in a town near you and they mean for you to know their name. Remember ‘seeing is believing’ and like any rock stars worth their status, they plan to settle for nothing less than world domination because for the CRANK COUNTY DAREDEVILS…it is ROCK or DEATH!!!