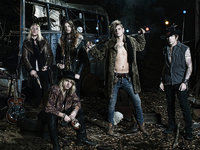 Dust Bowl Jokies is the new trashy glam stallion. The band was formed in 2011 and released their debut album in early 2012 "Cockaigne Vaudeville" produced by Nicko DiMarino and co-produced by Beau Hill (Alice Cooper, Twisted Sister, Europe, Gary Moore etc.). The debut album's main track Boots On Rocks Off has been played on radio stations all around the world (USA, UK, France, Italy, Germany etc.) and the album was just released in Sweden. Since 2012 the band has played as many festivals and nightclubs possible and they recently released a two tracked EP including the songs "The Wicked" and "Blood, Sweat & Perfume" which got some great reviews from all over Europe.
Now Dust Bowl Jolies signed on Bad Reputation and Cockaigne Vaudeville will be issue with these 2 new tracks. It’s time to rock ‘n’ roll again at the Swedish Hour !