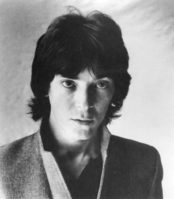 Born March 12, 1951,  Jack Green got into music through an aunt who owned a record shop in Glasgow in the late ’50s and ’60s.When Green was 13, he started forming his own bands and playing at local youth clubs. At age 15, he and a friend, Laray Collins, would get together and write songs, about five a week. Green’s first big break came when a music publisher in London heard one of his songs, and flew up to sign Green and Collins. Pop bands started to cover their songs. In London, the 18-year-old Green broke into musical theatre, winning the part of Woof in the rock musical Hair, where he performed with fellow cast member Joan Armatrading. In 1972, at age 21, Green started his own group, Sunshine, which got a major label contract with Warner Bros.. In 1973, Green signed on for a stint as the guitar player for T.Rex. Green toured with the band for a year through Europe, America, Canada, Japan and Australia. From 1974-1979, Green was with the bands Pretty Things and Richie Blackmore’s Rainbow before starting his solo career, which saw him produce four albums between 1980-84: Humanesque, Reverse Logic, Mystique and Latest Game. Humanesque is the album that made Green’s name. He recorded demos for Humanesque with former members of T.Rex. Green says his manager didn’t offer a good producer for the album, so he ended up doing it himself.  The title for the album was thought up by New York sound engineer Lew Horowitz. To describe Green’s albums, Western Canadian rock critics of that time used terms like: infectious, contagious, bloody good singer, molten metal sound, prime pop material. The second album, Reverse Logic, is therefore reisued on CD for the first time . It contains, as a bonus, The RCA Special Series, made of interview and large extracts of the first album (as well never released on CD). Definitively a collector item !

We always find catcht tracks such as One By One, Let Me Go, Let It Rock ...Brain Chatton, Andy Dalby are still here along others musicians such as Mel Collins (King Crimson), Simon Fox (BeBop De Luxe) and Pete Tolson (Pretty Things)