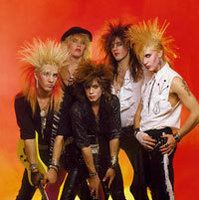 Jetboy was an excellent image-heavy hard rock band. They managed to merge elements of punk, glam and traditional hard rock into their own unique sound. However record company pressure stripped them of their creative freedom and they drifted away from their roots until the band's demise.
Formed in San Francisco, guitarists Billy Rowe and Fernie Rod wanted to a form a band in the vein of Hanoi Rocks, Girl and the New York Dolls. Filling out the group with Todd Crew (bass), Ron Tostenson (drums) and a spike-haired vocalist named Mickey Finn, the boys began practicing and making a name for themselves. In 1985 the band played Hollywood for the first time, and soon began making waves in the Sunset Strip glam scene. In late 1986 they finally signed their first major label deal with Elektra and were set to take the world by storm.
Things took a strange twist soon after though. The band got dropped by Elektra without even releasing any product and was quickly snatched up by MCA, and Crew was let go in favor of former Hanoi Rocks bassist Sam Yaffa. Very few of the 1986 recordings (later to surface on A Day In the Glamourous Life) got released on the debut, as the band's sound was being changed from street punk glam to radio friendly pop rock. Feel The Shake managed to hit #135 on Billboard's charts, but things were about to go bad for Jetboy.
Just prior to Damned Nation's release Yaffa walked away from the band to rejoin his former Hanoi Rocks cohort Michael Monroe. The back soldiered on with bassists Charles Norman and Bill Fraenze respectively, but lackluster sales of Damned Nation led to their dismissal by MCA. The final straw came when Rick Davis replaced Tostenson, which led Jetboy to change their name (and musical direction) to Mindzone. Mindzone was a poor attempt to fit in with the current trends in rock and failed miserably, but from its ashes came Billy Rowe and the much more entertaining American Heartbreak.
In 2010 Jetboy released their first studio tracks in twenty years with three new songs on the Off Your Rocker EP with Finn, Rowe and Rod along with the rhythm section of Michael Butler (bass) and Doug Hovan (drums), both of whom were out of the band by the time the EP saw the light of day.