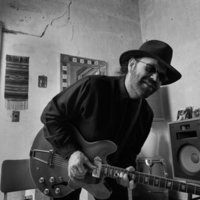 Colin Linden is a man of many talents. Colin is an accomplished singer, songwriter, guitarist and producer. He has played on over 150 albums and produced more than 30 CDs. Colin has worked with artists such as Bruce Cockburn, Colin James, Leon Redbone, T-Bone Burnett, and The Band, just to name a few.

Colin began playing acoustic guitar before he turned eight, buying his first guitar from his older brother for $5. Developing a love for the blues at an early age, Colin met his hero, the legendary blues man Howlin' Wolf, a.k.a. Chester Arthur Burnett, at a Yonge Street tavern when Colin was only eleven years old. After begging his mother to take him to the matinee performance, they arrived three hours early at the Colonial Tavern to get a good seat on the balcony. As luck would have it, Howlin' Wolf was having lunch at the side of the stage and Colin walked right up and introduced himself. They spent three hours talking about the blues that afternoon. From that day on, the two developed a friendship that lasted until Wolf died in 1976, and to this day Howlin' Wolf remains Colin's biggest inspiration. A very similar experience presented itself to Colin when he was touring through Regina at the age of seventeen. He met an extremely talented eleven year-old guitarist who shared his love of the blues and immediately latched on to him. Today, we know this young man as Colin James and their friendship and collaboration has lasted for over two decades.

Colin received a Grammy nomination for his contributions to the Nashville based 'Tribute To Howlin' Wolf' CD. Colin is slowly getting the recognition that he deserves. One of Toronto's most prized musicians, Colin recorded his first album with the legendary blues man Sam Chatmon in 1979, followed by the release of his first solo album a year later, 'Colin Linden Live'. In 1988, Colin released his first disc on Sony Music Canada's Columbia label entitled, 'When The Sprit Comes'. Since that time, Colin has kept himself quite busy. He has played in Bruce Cockburn's band and produced a number of Cockburn's albums. As a session guitarist, he has played on recordings by Dwayne Steele, The Band, Amy Sky, he wrote the hit 'Guitar Talk' for Michelle Wright, and produced Sue Foley's multiple Maple Blues Award and Juno winning album 'Love Comin' Down'. Colin also co-wrote and produced many of Colin James' albums, including the Juno Award winning 'National Steel'.

Though much of his time is spent working behind the scenes with fellow artists, Colin fully enjoys focusing on making his own music. He has released six of his own albums and has received much critical acclaim over the years. His fourth release in 1994, 'South At Eight North At Nine', won the Blues / Gospel Juno Award. In 1996 Colin won another Juno Award in the 'Blues & Gospel' category for his production work on Lennie Gallant's 'The Open Window'. Colin released 'Raised By Wolves' in 1997 to extremely high praise and excellent reviews. In February 1998, Colin shared the Maple Blues "Producer of the Year" award with Colin James for his work on James' 'National Steel' CD. Colin received a Grammy nomination in 1999 for his contribution to the Nashville-based 'Tribute To Howlin' Wolf' disc.

In 1996 Colin divulged himself into what he called a "Side Project", the super-group Blackie and the Rodeo Kings. The group consisted of Colin, Stephen Fearing and Junkhouse frontman Tom Wilson. Formed because of a mutual love and appreciation for the music of William P. Bennett, Blackie and the Rodeo Kings received a Juno nomination for their tribute album to Bennett, titled 'High and Hurtin'. In 1999, Blackie and the Rodeo Kings issued their second album, the 2000 Juno Award winning two-CD set 'Kings of Love', a collection of original tunes and covers of songs by Bruce Cockburn and Murray McLauchlan, to name a few. In 1999, at the prestigious Toronto Arts Awards Colin was presented with the Music Award for his contribution to Music by The Lieutenant Governor of Ontario, Hillary Weston.

At Canada's 2000 Juno Awards, Colin was repeatedly acknowledge and recognized by the music industry. He won three awards. He won a Juno in the 'Blues' category as producer for Ray Bonneville's 'Gust of Wind'. Another Juno in the 'Roots and Traditional: Solo Artist' category as the producer of Bruce Cockburn's 'Breakfast in New Orleans, Dinner in Timbuktu'. Another Juno Award in the 'Roots and Traditional: Group' category as a member of Blackie and the Rodeo Kings.

Although Colin was born and mostly lives in Canada, he and his wife now spend part of the year in Nashville where Colin's profile is rising considerably. It was there that he received a call from his good friend T-Bone Burnett, who asked him to come to a film set and to teach a young man how to play the blues guitar. Not only did Colin teach the actor how to play, but he also ended up playing a version of "Hard Time Killing Floor Blues" that was used in the film! That film is titled 'O Brother Where Art Thou?'

Colin performs a version of this song as a bonus track on his latest release titled 'Big Mouth' which will be released in Canada on May 15th, 2001. Big Mouth is Colin's best recording to date! On this new release Colin returns to an old raw-blues style of music, with a few touches of roots-rock. Special guests who join Colin on this album are: Keb' Mo', Lucinda Williams, Jonell Mosser, Bruce Cockburn, Jessie Alexander and Lee Roy Parnell.

Colin thinks it will be at least 20 years before people recognize him as a "cool, old, blues guy". However, with his countless contributions, and endless devotion to creating music, Colin is and will always be at the heart of the Canadian music scene.