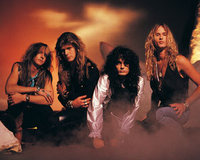 Formed Los Angeles, California, USA...mid 80's by Mike Hannon and Khurt Maier. Witht the line-up complete by Jimmi Bleacher and Scott Lane (later replaced by Pete Reveen). Eventually securing a deal with Geffen, the band released a fine debut album, Every Dog Has Its Day in 1990. Previewed by the brillant blues/funk-rock raunch of the Come Along single, the album drew countless comparisions with led Zeppelin. Bleacher's Plant-esque warbling certainly adding weight to the claims. Like Led Zeppelin, Salty Dog were also unafraid to pay tribute to thier blues mentors. Despite the critical acclaim, Salty Dog prematurely came to an end following the departure of Jimmi Bleacher soon after the debut's release. A shame, as they walked the L.A cock-rock thing like they talked it, unlike many groups of a similar ink.