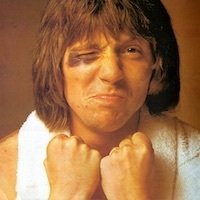 After the success of Stevie Wright's debut album Hard Road and its lead single "Evie", producers Harry Vanda and George Young returned to Albert Studios with Wright to record the follow-up album.

The riff to “Black-Eyed Bruiser” is a recycled version of “You Really Got Me” from The Kinks. Vocally, Stevie Wright is basically Bon Scott. Rose Tatto covered this song in 2006.

“You” is another classic song, in the vein of “Knockin On Heaven’s Door” with a big “Hey Jude” ending written by Vanda and Young.

The lead single "Guitar Band" reached No. 13 on the Australian Charts and No. 8 in Melbourne.