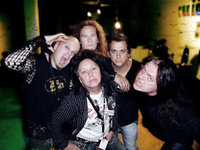 Zinny Zan is one of the most charismatic frontmen ever. His voice contains everything from Phil Lynott’s nonchalant cool to Steven Tyler-like screams. Mr. Zan only has to open his mouth to create the sound of true rock'n'roll.

Admittedly, it’s been quiet on the Zan front for far too long, but now his own band Zan Clan are back with a new lineup and an new album (including a bonus DVD). The album includes a collection of songs that feel like a 21st century sequel to Shotgun Messiah’s ground-breaking debut album, which shifted more than 500 000 units in the U.S. alone.

Even before his American career as the frontman of Shotgun Messiah, Zan had been one of the pioneers behind the original Scandinavian punk wave as well as creating the Swedish glam rock scene as frontman of Easy Action - the first Swedish band ever to sign an international deal with a major record company.

Zinny’s new partner in crime is platinum-selling songwriter, producer and guitarist Chris Laney. A man who has also worked with the likes of Bruce Kulick (Kiss), Randy Piper (WASP) and several others. Teaming up with Laney has resulted in the same kind of revitalization for Zan as Rick Rubin meant for acts like Slayer, Red Hot Chili Peppers and AC/DC. Probably because Laney inhabits the same combination of fan, visionaire and total pro as Rubin.

Together, Laney and Zan hand-picked some of the most amazing Swedish players around: Johan Koleberg is Sweden's greatest drummer in the field of hard rock and metal. He was a member of Lion’s Share and has played with some of Sweden’s biggest solo acts. The magnificently versatile guitarist Pontus Norgren has lent his skill and taste to bands like Great King Rat, Jekyll’n’Hyde, Humanimal and Talisman, as well as working as a session player. Ballsy bassist Pontus "Eggy" Egberg, formerly of Lion’s Share, is also a sought-after session player.

Together, these guys deliver kick-ass arena rock with a party attitude and a dedication impossible to find anywhere else on the planet.

Zan Clan made their initial appearances at venues like the Hard Rock Café in Stockholm, the Rock Classics Cruise and with Queensrÿche and Whitesnake. They also appeared on an American tribute album to Cheap Trick, playing the power pop heroes’ most famous song, "Surrender". A song that was also released as a single which received a lot of airplay.

At 18 Zinny Zan was a ground-breaker of Sweden’s glam scene. A few years later he was a legend, only hanging out with the best of them. At 25, he was one of the few Swedes who had lived life in the fast lane in Los Angeles and New York City - and lived to tell the tale. Which he actually will. Zinny’s name will be ever-present in the media during the next 12 months.