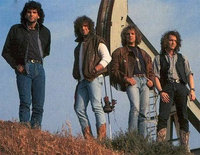 Giant is an American melodic hard rock band that was formed in 1987. The band consisted of founding members Dann Huff (lead vocals & guitar) and Alan Pasqua (keyboard), and had Dann's brother  David Huff on drums and Mike Brignardello on bass. The Huff brothers were part of the founding members of the Christian rock band White Heart.