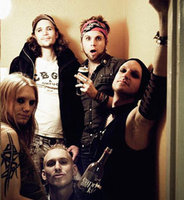 ”Sweden’s HELL N’ DIESEL are a rare specimen these days: a band who look as alarmingly rock as they sound. Their sledgehammer sleaze metal is a barbed wire fist”
Classic Rock Magazine #107, July 2007

HELL N’ DIESEL was formed in the beginning of the new millennium by five young kids from Freak City in the middle of nowhere in Sweden. The guys EVIL (vocals), SLEDGE (guitars), MAXX WHYTE (guitars), SUDDEN (bass) and BLANCO (drums) spent all their time playing music with the ambition to achieve world domination, armed with fire starting heavy rock n’ roll.
In 2004 HELL N’ DIESEL released two EPs on a tiny label, that got great reviews from Sweden Rock Magazine, Close Up, as well as local press and airplay on Swedish national radio. It also gave the band an opportunity to tour in Germany for two weeks, including the cities of Berlin, Hamburg, Frankfurt, Hannover and Osnabrück, with Sparzanza (SE) and Duster 69 (DE). The response was amazing, and another tour was booked for 2005. Then guitar master SIR SLEDGE sadly broke his arm one crazy night under the influence, so they had to cancel…
Last year HELL N’ DIESEL signed with Smilodon (Babylon Bombs, Diamond Dogs) and now it’s finally time for the debut album PASSION FOR POWER.

PASSION FOR POWER is an eleven tracks fully loaded rock n’ roll machine gun, recorded and produced by HELL N’ DIESEL and Thomas ‘Plec’ Johansson. The album is scheduled for release on September 28 in fifteen European countries, and the first single is SWEET SISTER, featured on Classic Rock Magazine’s CD “Sons of Guns” in July 2007.

HELL N’ DIESEL know how to throw a show and get a party going on stage. Like any real rock band should be, they are a real knock out live. Over the years they have played on the same scenes as some of Sweden’s finest: Entombed, In Flames and Transport League, and festivals like Metal Town and Swedish Metal Xpo.

“We all played in metal bands before, but we’re raised on rock n’ roll music from the 80s scene”, says vocalist Evil, “so I’d say HELL N’ DIESEL is the natural offspring”.